Welcome to the EOS Cryptocurrency review. New to this space and interested in investing in cryptocurrency?

EOS Cryptocurrency and Blockchain Use Case

Before we dive in I think it’s important to point out that the EOS cryptocurrency platform does not yet exist. The team is currently working on it and the mainnet is expected to come online in June 2018.

EOS is a platform that will allow developers to build and develop decentralized applications. For example, organizations that want to produce blockchain solutions for managing their supply chains can do so by building a solution on top of the EOS platform. This organization can gain access to the features of a blockchain network without having to build one themselves.

EOS is similar to Ethereum and Lisk in this way. However, the EOS platform possesses features that differentiate it from projects that already exist.

First, EOS will use the Delegate Proof of Stake (DPoS) consensus mechanism. This system allows holders of the EOS token to vote for the parties that will approve transactions. These representatives (or delegates) will secure the network by reaching consensus and producing blocks. No other network participant will have this power.

This is different from the Bitcoin or Ethereum platforms. These networks utilize the Proof of Work consensus mechanism. This system allows anyone to approve transactions on the network assuming they have the right hardware to do so.  In theory the DPoS system can process more transactions in a shorter amount of time making it better at scaling.

The EOS cryptocurrency platform will be built similar to an operating system. This, according to the development team, will improve the scalability of applications. Users will have an account name like traditional software platforms or operating systems would utilize. They can administer actions via this account name. This allows for a more user friendly experience and should increase adoption rate.

Additionally, EOS users can build rules that will allow them to schedule transactions that can be executed at a future time. Rules can also be put in place that will allow certain accounts to access functionality of another without having access to sensitive information like private keys. This is often necessary when a team is working together on an application.

The development team is spearheaded by Daniel Larimer. Daniel serves as the CTO of block.one. Block.one is an organization that “designs free market systems to secure life, liberty, and property by publishing open source software that is free for everyone to use”. They are the driving force behind the EOS project.

Daniel is a highly respected member of the blockchain community. He got involved with the Bitcoin project in 2009 and even corresponded directly with Satoshi Nakamoto. He went on to find Steemit, a decentralized social media and knowledge sharing platform that rewards users for sharing content that is useful to the community. It’s native asset is STEEM and it is currently ranked 32nd in terms of cryptocurrency market capitalization.

Dan also had a hand in building Bitshares, an open source financial platform that utilizes blockchain technology. Bitshares gives users access to a decentralized exchange, smart contracts, user-issued assets, and other features. The platform was developed in 2014 and it’s native asset BTS ranks within the top 50 cryptocurrencies.

Brendan Blumer is the CEO of block.one and has a major role to play in the business development of the project. Brendan started his first company at the age of 15 years old. He developed a website and sold virtual assets to gamers for profit. This company was acquired by a Brock Pierce founded company three years later.

From there he concentrated on real-estate focused technology solutions building okay.com and ii5. He still holds the position of CEO at ii5 which means he’ll be the CEO of two different organizations at the same time.

Daniel Larimer has his hands in a variety of different cryptocurrency projects and these should naturally be business partners of EOS. He is also well connected in the space and should influence other large players to jump on board. 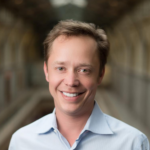 Brock Pierce is the founder of Blockchain Capital which is the main financial supporter of block.one. Brock served as the director of the Bitcoin Foundation before it went insolvent. Brock has an extensive history in the gaming and cryptocurrency space. Please take some time to research his business history and make sure you are comfortable before investing in EOS.

Galaxy Digital is a digital asset merchant bank backed by Mike Novogratz. Earlier this year Galaxy Digital announced a joint venture with block.one that was dedicated to making strategic investments in projects that utilize the EOS platform. This is a big deal because the platform has now secured funding for its development without a working model. This demonstrates Galaxy Digital’s trust in the EOS team.

EOS will find itself competing with:

The EOS cryptocurrency project is intriguing. It offers solutions to the usability and scaling issues that projects like Ethereum are facing at the moment. The vision of the team seems clear and organized.

The team itself is made up of high quality individuals. The project’s Github page is active and it’s obvious that progress is being made as we move closer to the platform’s launch. The project has also put itself in a good position from a partnership perspective.

However, it’s very difficult to give the project full marks in each area because the platform does not exist yet. If the project delivers on most of what it has promised in the whitepaper then EOS could potentially rival the Ethereum platform in the DApp space. If it does not then the token may be overpriced at its current price point.

There’s a lot of question marks when it comes to EOS. The reward here is big but naturally so is the risk. Understand that and balance your portfolio accordingly before investing in EOS.