Welcome to the NEO Cryptocurrency Review. Interested in investing in cryptocurrency? Access our Blockchain 101 material before you dive in!

NEO Cryptocurrency – What’s The Use Case?

NEO is often referred to as the “Ethereum Killer” and as ” Ethereum for China”. This is because it is essentially a clone of Ethereum.

NEO and Ethereum both have the same blockchain use cases: smart contracts and decentralized applications (dApps). However, NEO is unique because it runs a virtual machine which lets developers code smart contracts in a variety of languages such as C#, Java and Python. This is a big advantage NEO has over other dApp platforms.

Listed on the NEO website as the “NEO Foundation”, Da Hongfei and Erik Zhang are the two co-chairs responsible for “Setting NEO’s Vision and Strategy”.

Da Hongfei is the Founder of NEO. Hongfei is also the Founder and CEO of Onchain, a blockchain development company focusing on both enterprise and institutions. Both of Hongfei’s projects were launched and are headquartered in China. The two were the first blockchain development projects based in China earning Hongfei the status of a blockchain and cryptocurrency “pioneer”.  He has expertise in Chinese use adoption, enterprise applications and government regulation which is a huge plus for NEO.

Erik Zhang is Da Hongfei’s counterpart. Zhang is the co-Founder of NEO and  founded Onchain with Da Hongfei. Erik Zhang is most known as being the “author of the DBFT consensus mechanism” and currently serves as the CTO of Onchain.  Erik Zhang is a well respected developed in the space and is a very valuable asset to the NEO team.

Who Is NEO Partnered With?

The most notable partnership of NEO consists of the Founder’s other blockchain project, Onchain.

Da Hongfei clearly stated what the two will work on together:

“NEO is a community project. Onchain doesn’t own NEO. NEO and Onchain are separate entities. NEO is a community driven/funded open-source project, while Onchain is a VC-backed company. The connections are: (1) Two of the five co-founders of Onchain are also founders of NEO (2) The consortium version of NEO, namely DNA, shares the same architecture and smart contract system with NEO (3) With NeoX, the cross-chain protocol, we are exploring the possibility of integrating permission less blockchain (NEO) with permissioned ones (DNA).”

The NEO cryptocurrency website also lists the following as contributors to the project:

NEO Community – This has no description on the NEO website. The group is primarily made up of developers focusing on the “City of Zion” – ” a global, independent group of open source developers, designers and translators formed to support the NEO core and ecosystem.”

The following can be considered competitors to the NEO cryptocurrency:

The following can be considered competitive advantages that the NEO cryptocurrency has compared to competitors:

Competition in the space is the biggest risk to this project’s chance of succeeding. Smart Contracts are an amazing blockchain use case that will have a ton of application in the future. However, there are a ton of high profile projects (see Competitors section above) that are also working to achieve the same goal. It will be

It should be noted that Network Hashrate and Mining Distribution information were not readily available.

The NEO network has nearly 1,600,000 wallet addresses which is a a solid amount. It is unclear how many of these addresses are “active” but this is a good sign for this project. 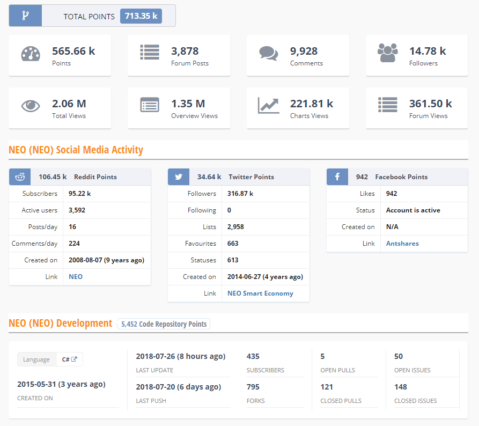 CryptoCompare shows some other great social and development trends for NEO. The project has a very strong social media presence with a ton of activity on both Reddit and Twitter. There has been a lot of work going on in the development end of the platform as well which is a great sign for this network.

Overall, the project sees itself as a distributed-platform for a new “smart economy.” The belief is that physical assets will be represented on the blockchain which will allow it to be traded, bought and sold via smart contract technology.

Incorporating digitalized assets, digital identity, and smart contracts, NEO’s vision of a “smart economy” is built on the type of vision akin to Chinese governance. NEO’s semi-centralized dbFT blockchain reflects this, with the NEO Council holding nearly 50% of tokens “to foster the ecosystem”.

NEO’s relationship with Onchain is a tremendous asset which will serve it well in the future. We expect to see the project increase it’s partnerships with other Chinese blockchain entities with some collaboration with the Chinese government in the future. NEO is one of the the more exciting projects in the space and has a lot of promise moving forward.