Everyone is talking about hard forks. There’s been so many Bitcoin forks I’ve lost count. But what is a hard fork exactly and why do you end up with double the amount of crypto? We’ll dive into the basics first and then explore hard forks in depth.

Finding yourself asking what is blockchain technology and how can it be used? It’s probably best to check out our introductory material before moving forward with learning about hard forks.

So What Is A Hard Fork?

A hard fork is a change in the underlying software that a blockchain network runs on. A hard fork will create a new version of the software that is not backwards compatible with previous versions. Only users that upgrade can continue to use the network.

Think of it like upgrading the operating system that your computer runs on. If you upgrade from Windows 7 to Windows 10 you might be required to get new versions of the applications that you are using.

A non-contentious hard fork happens when the whole community agrees that a software update is needed. Perhaps a bug is found in the code or a new software push is needed to improve the platform.

When a non-contentious hard fork takes place all users (or most) switch over to the new platform. No additional cryptoassets are created because the old network is not maintained. As far as the community is concerned the cryptoasset of the new network is the same as the old network.

And Other Forks Do

So what is a hard fork that produces new tokens and why does that happen? Some hard forks happen because the community divides over an issue. A good example is the DAO incident on the Ethereum network.

Other times a new development team wants to create a new cryptocurrency. So instead of building the code from scratch they fork the network of an established cryptocurrency like Bitcoin. From there they change the code as needed. For example, Charlie Lee forked the Bitcoin network and made changes to create Litecoin.

In either case one network becomes two. See the diagram below: 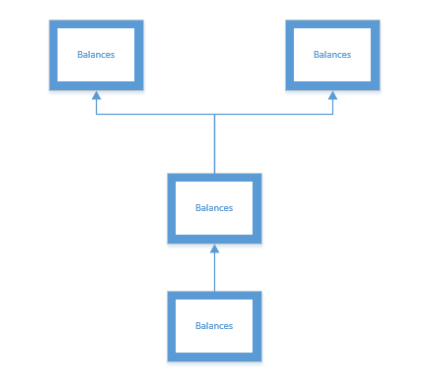 So Why Do I Get New Coins?

When a network hard forks two separate ledgers are created and they share the same history. At the moment right after it forks these ledgers are identical. Therefore, you become the owner of two sets of crypto because in blockchain the ledger rules all.

After the hard fork the ledgers will update in different ways. After all, the software used by each network is different.