Welcome to the Electroneum Cryptocurrency Review. New to this space and interested in investing in cryptocurrency? Access our other crypto and blockchain related material before you dive in!

Electroneum Cryptocurrency and Blockchain Use Case

Electroneum (ETN) is a blockchain solution that makes digital money easy to use for everyone. ETN is an exciting cryptocurrency that is specifically designed for mobile users. The project is unique since it targets the mobile market. The Electroneum cryptocurrency project is working towards entering the online gaming  and gambling markets in the coming years.

Electroneum is built off the Monero code to allow for transactions on a decentralized blockchain. Like Monero, Electroneum has some built-in privacy features. Electroneum’s stealth addresses are a one-time public key that “prevents recipient’s funds from being linked with their wallet.”

From the project’s whitepaper, it looks like there are at least 12 team members. The team also has 2 advisers, Mark Robinson and Andy Denton. Both men are successful individuals. Robinson has served as the director for a number of businesses listed on the London Stock Exchange. Denton is an experienced online gaming consultant with a solid track record.

Additionally, the project seems to have a pretty active Github community.

Partnerships can be essential to the success of a blockchain project. This is because if no one is using a particular blockchain network, their token is essentially useless.

The following are confirmed partnerships:

The following are Electroneum’s main competitors:

The following are from Electroneum’s white paper and should be considered when determining the project’s strengths:

Electroneum is another cryptocurrency that is hard to find the trends on the underlying blockchain. However, per BlockExplorer, it looks as though the average time to process a block is 1 second and a total of 15 transactions per second. These are promising for a new blockchain but it will be interesting to see how scalable the current chain is once more transactions take place on the network.

The Electroneum cryptocurrency project does seem to have a lot of activity on social media. CryptoCompare shows a total score of over 230,000 which is impressive. It shows there is a lot of discussion around the project online and many people are interested in the cryptocurrency. 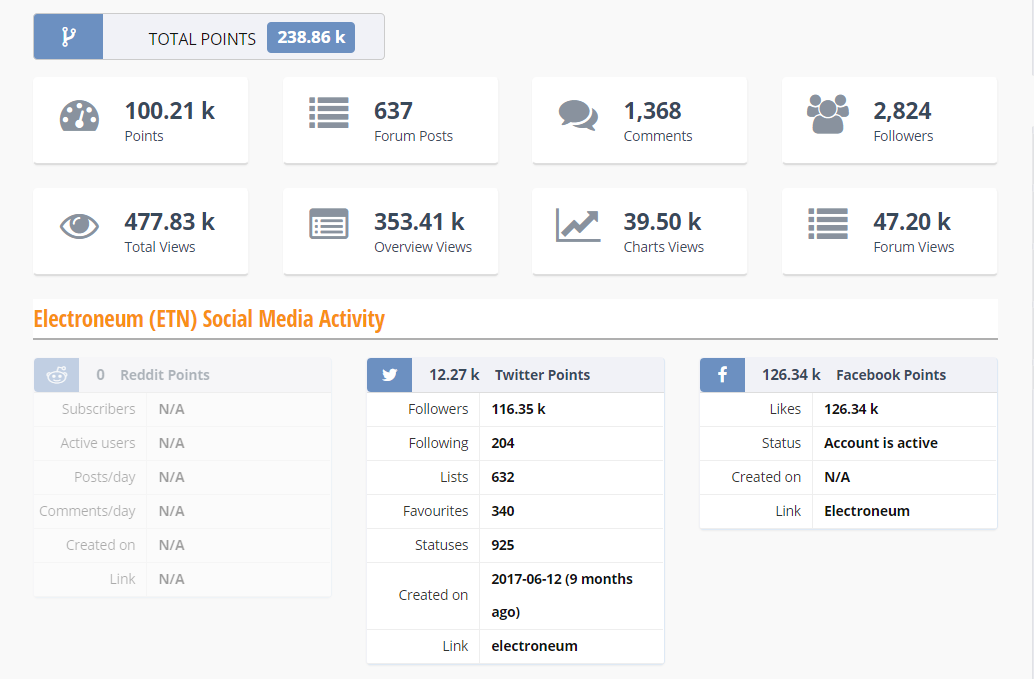 Overall, Electroneum is a newer blockchain project with a lot of potential. The project is focusing on the “mobile currency market” and plans on implementing their cryptocurrency in online gaming and gambling businesses.

Electroneum has a solid team behind it and has the resources to succeed. The team has also proven that they can get the word out about the project online which is good for their branding.

However, the project has yet to announce any major partnerships which is a little concerning. Until the project partners with a big business that will incorporate their cryptocurrency and blockchain network, it is more of a speculative play than an investment.

Although this project may be very successful, it is better to monitor the development in the coming months before making ETN a major holding in your cryptocurrency portfolio. Once Electroneum gets integrated into some online games, this cryptocurrency can jump into the top 25 cryptocurrencies in terms or market cap.